It seems to me that there are not many people in the world who have combined a career as a physicist with one as a tour operator. But I have.

From the time I received my bachelors degree in 1959 until  my last class in 1982, I did research and teaching almost exclusively in physics. However, in that year, relatively burned out from the experience of the classroom and convinced of the value of travel as a mode of learning, I decided to pursue my dream of a second career and formed Study Activity Tours, (SAT) a group travel company with a clear educational agenda. Twenty-five years later, I sold the company to settle down and become a writer. 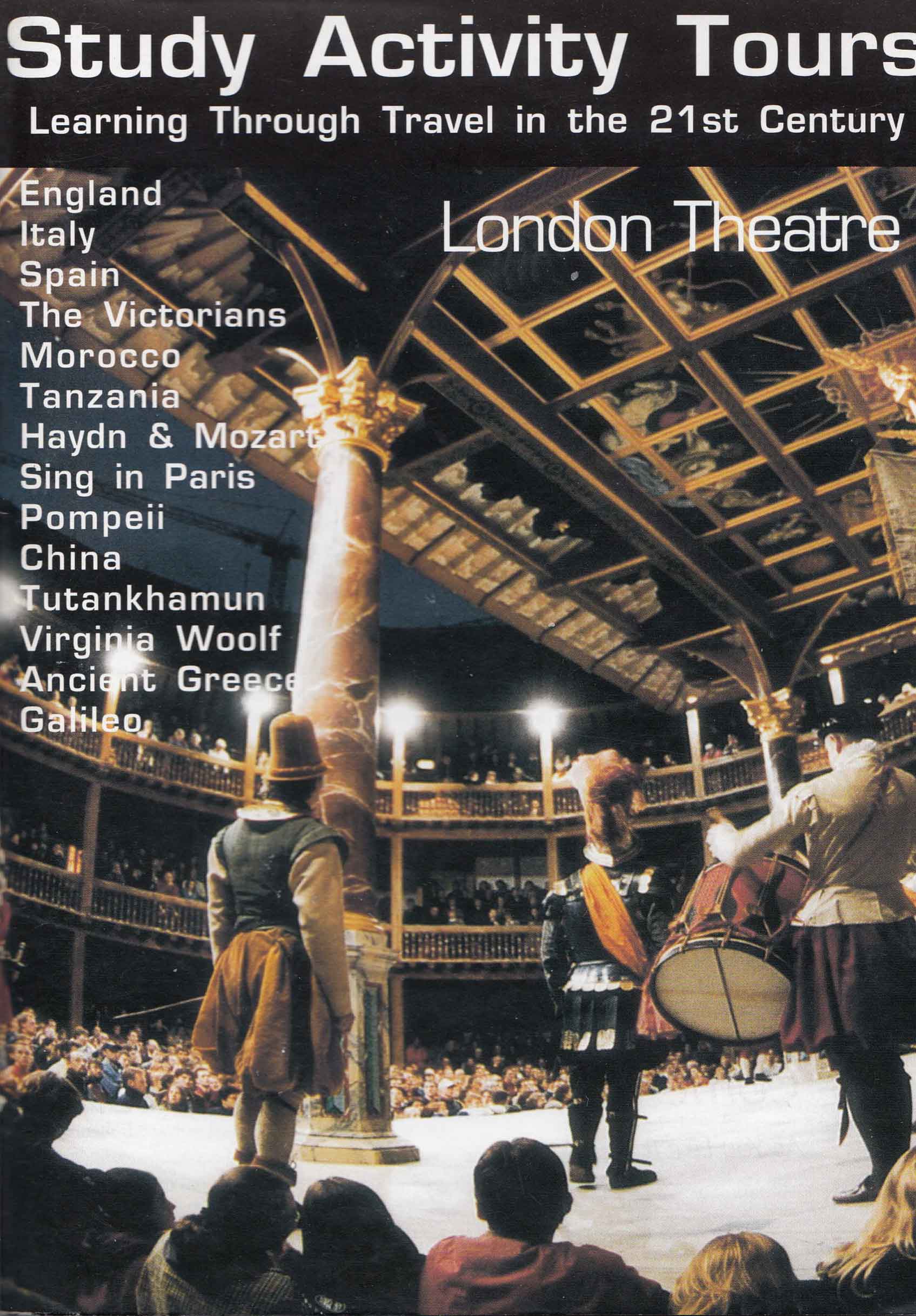 Oh, you might ask what’s so unusual about that! Well, there was one destination which I organised as a tour operator which provided personal experiences which could have been very valuable to me when teaching physics . . . it would have been pure synergy.

As yesterday was the anniversary of the death of King George VI, the father of Queen Elizabeth, I was reminded of the following story which I knew eventually would appear in this blog. It is mostly about science but don’t leave yet, it has some interesting ironic bits as well.

One of the most popular tours introduced by my travel company SAT was a Safari in Kenya. This involved a rather long flight to East Africa and overnight stops at some of the most luxurious hotels in the world, including the famous Treetops Hotel and the Mount Kenya Safari Club on the first two nights of the itinerary. These were very glamorous properties then. I should add, in the early days of the company, I myself acted as tour manager for the groups as it was a learning experience of the highest value. (Somebody had to do it!).

Treetops became famous all over the world because young Princess Elizabeth was staying there when her father, King George VI died unexpectedly on February 6, 1952. (Yes, he was the King with the stammer). Princess  Elizabeth was watching big game with the Duke of Edinburgh when informed that she had become the Queen of England. Like everything else, the facts are a little different, but never mind.

‘For the first time in the history of the world,’ wrote a big-game hunter in the Treetops logbook, ‘a young girl climbed into a tree as a princess and climbed down as a queen.’

Treetops, founded in 1932, is Kenya’s oldest safari lodge, a wooden triple-decker ship of the forest beached on the edge of a floodlit waterhole in the mountainous Aberdare National Park. No need to go banging around in the bush when you stay here. Instead the animals of the forest come to you – lured by a natural salt lick. Elephant, buffalo and bushbuck are regulars. But you must bring warm clothes. At 6,450 ft the night air is cold.

Elizabeth’s momentous visit put Treetops on the map and overnight it became the world’s most famous tree house. It was the beginning of a Royal love affair with Kenya, and Africa as a whole, that has continued to the present day.

I remember distinctly the very first night of my stay at Treetops. As guests we were invited by a notice displayed on the wall in each room to engage a switch if we wanted to be awakened during the night if a white rhino or some other interesting beast appeared at the salt lick. Of course, I put the switch to the ‘on’ position because I didn’t want to miss this event if it were to occur, even in the middle of the night.

Sure enough, startled from a fitful sleep by a gentle buzz in my room, I was awakened and told that a rhino cub and its mother had appeared at the salt lick. I picked up my camera and quickly tip-toed out to the viewing terrace. When I arrived onto the terrace, I discovered that about a dozen or so guests at the hotel – some in their pyjamas – were already there and mesmerised by the rhinos who had wandered out of the forest to the salt lick. Yet strangely, what engaged me immediately more than the animals was the startling view in the sky.

I knew from teaching Astronomy 101 that the Southern pole star is located within the Southern Cross. So that was a first for me. Excited, I quickly looked to the right and on the other horizon – not hidden by the trees of the forest – I saw the familiar stars in the bowl of the Big Dipper, specifically, the two stars farthest from its handle. From these stars I was able to locate Polaris, the Northern pole star as I had done many times in the past. Thus, I was viewing the constellations near the Northern and the Southern pole stars simultaneously! I knew this was possible because the light coming from these stars is refracted, i.e. bent, due to the earth’s atmosphere, allowing one to see below the horizon  . . . just as I had told the class in Astronomy 101.

The two diagrams shown here based on the Celestial Sphere model should make it clear why this was such a new experience for someone from a mid latitude location in the northern hemisphere. The equator is really a cool spot for looking at the sky, especially in deepest Africa far away from the glare of city lights.

Remarkably, on my first evening in equatorial Africa I was able to prove to myself by personal first-hand experience that a phenomenon which I had described so glibly to students in a classroom was, in fact, true. But, why was I so amazed?

The next day we continued north through the Aberdare Forest to the Mount Kenya Safari Club. The club is located on the equator at 7000 feet above sea level on the slopes of Mt. Kenya which towers above the gardens and forests beyond the club. It is said that the view from the veranda bar alone is worth the trip. Formerly an inn for soldiers of fortune and big game hunters, the inn had been transformed into the most beautiful hotel in East Africa.

MKSC had an additional glamour connotation because it was partly owned by the American actor William Holden who had been a regular visitor here since the 1950s. This was long before the tourist boom in Kenya during the second half of the 20th century.

At the time our safari trip was organised, Holden had passed away and the club was run by Holden’s co-owners and his partner, actress Stefanie Powers.

In 1973, Holden had brought Stefanie into his life and into his dream and she was swept up by Bill’s contagious enthusiasm for Africa. After his death, Stefanie, together with the other owners, formed the William Holden Wildlife Foundation to carry out his unfinished work and carry on with his dream. The foundation received its IRS status as a Public Charity in October 1982 and the first group camped on the site of the education centre in January 1983, shortly after our visit. Holden gave his wholehearted support to the game ranch and often referred to it as the greatest work of his life, over and above all of his films. His untimely death in 1981 brought his life to an end but not his work.

Naturally, I was certainly not thinking about physics whilst visiting such a glamorous property. After all, I was now retired from teaching physics and paying more attention to my clients, sophisticated upper middle-class travellers from the corporate community in London. This, after all, was my first safari as well.

On the first day of our visit to the famous property, located at the exact location of the equator, we were greeted by a young African boy of about 13 or 14 years of age who took me back into the classroom. He was carrying a large metal pail and a funnel, which seemed quite strange to me and my colleagues. I thought he might be another African trying to solicit a donation from rich tourists on an expensive tour. But he had a particular agenda in mind and calling me aside as the leader of the group, he beckoned  me to see a demonstration he wanted to carry out. In those days I wasn’t very wary of such intrusions and since he was so young, I gave him the benefit of the doubt.

Whilst my clients went for a needed drink of water, the young lad took the very large pail, filled it with water, and poured it into the funnel. The water swirled around in a clockwise direction disappearing down the funnel, something I’ve been experiencing all my life. Nothing remarkable about that! Then, he asked me to walk with him a mere 15 metres or so in a southerly direction which I knew meant we would then be in the Southern Hemisphere, . . . but just by a minuscule amount. We crossed the actual line which was indicated by a sign as the equator (latitude = 0.00). Again, he took the pail and poured the water into the funnel and as he had done before. However, this time the water swirled in a counterclockwise direction before disappearing down the funnel. I was flabbergasted. 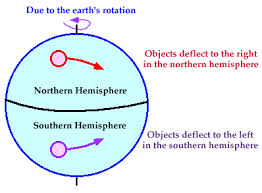 It is interesting that this was a shock to me even though I had told hundreds of students about the what causes the clockwise motion of the water.

Did you ever wonder why a sink full of water always drains away in a clockwise direction?

It’s because of the Coriolis force, I would say ! The water swirls clockwise because we are standing in the Northern Hemisphere. A sideways force develops as a result on the spinning earth. See, it says so right in the textbook, discovered by a French mathematician named Gustave Coriolis.

But did I believe this?

In the past, I was only able to explain this phenomenon by using a rather secondhand experience claiming that if we were standing in the Southern Hemisphere, the water would run down the drain in a counterclockwise direction. However, I was never able to demonstrate this because I spent my entire life in the northern half of the earth. Strange as this may seem for a physicist to admit, I had become somewhat skeptical that this reversal would actually occur.

After seeing the counterclockwise motion, I immediately asked myself what would happen right on the equator. The young man was ready for my question and proceeded to go back to the point where the sign indicated the exact point of the equator. He poured the water again into the funnel. The water did not swirl at all but proceeded to flow down down the centre of the funnel much to my amazement and great satisfaction. Absolutely jaw-dropping!

Even though I had been teaching for twenty-five years that these effects might be observed at the equator, I had to smile ironically when it was demonstrated to be true even by moving such small distances between the two hemispheres. (There are more complications to this effect and here are a link or two which goes a little deeper.) But I can tell you that on that February morning just on the equator at the Mount Kenya Safari Club, the Coriolis Force was dramatically evident and was demonstrated to me by a very young Kenyan with a bucket and a funnel.

I will never forget this simple lad and his powerful experiment. Yet what surprised me most was that a principle which I had been expounding for years in my classroom was actually true and could be demonstrated so readily at the equator.

Needless to say, I spent much of the rest of the trip thinking about these experiments – the refraction of starlight and the Coriolis force  – which I observed on the equator at the great safari Lodges, Treetops and The Mount Kenya Safari Club. Oh yes, the elephants at Samburu, the flamingoes at Naivasha and the zebras at Keekorok were great too.