When my wife and I first arrived in Britain in 1964, we were constantly harangued by Brits because of the war in Vietnam. These early days abroad during the Vietnam War constitute one of the first periods in my life to that point in which I was ashamed to say I was an American.  The next time this happened was perhaps less serious but still heartfelt. It involved the Tennis Championships at Wimbledon.

However, the following year the volatile Connors, already known known for his profanity and rude antics on the court, lost to Arthur Ashe in a match which I watched with great interest. I was cheering madly for Ashe, hoping that if he won, international tennis would remain a gentleman’s game played with grace and style. It was not to be.

The Swede Björn Borg dominated Wimbledon during the next five years, defeating everybody, including John McEnroe (twice) and Connors (twice). After  reaching the Wimbledon quarterfinals in 1975 – where he lost to eventual champion Ashe – Borg did not lose another match at Wimbledon until 1981. As the Romanian Ilie Năstase exclaimed during these years, “We’re playing tennis, Borg’s playing something else.”

Borg’s demeanour on the Wimbledon court was exemplary. In addition to his near perfect play in winning 41 consecutive matches during this stretch, he conducted himself like a true champion, always in control of his emotions, even under the most intense pressure. In the last match of this sequence, Borg won his fifth consecutive Wimbledon singles title in 1980 by defeating McEnroe in a five-set match, often cited as the best Wimbledon final ever played.

In this 1980 match, Borg lost the opening set to an all-out McEnroe assault, then took the next two sets and had two championship points at 5–4 in the fourth set. However, the American averted disaster and went on to level the match in an historic tiebreaker, a 34-point thriller with McEnroe winning 18–16. In that game, McEnroe saved five match points and Borg six set points before McEnroe finally won the set. In the 5th and final set Björn served first and fell behind 15–40, but then won 19 straight points on serve and prevailed after 3 hours, 53 minutes.

My wife Pat loves to tell a story about this match. She was in the grounds that afternoon but did not have a ticket to the Centre Court. Having stood in a queue in the morning for the general admission, she was content having watched the other matches on the side courts. Just as she was about to leave, with the cheering and groaning from the Centre Court getting more and more intense, an elderly lady in a straw hat came out from the  exit and handed her a ticket, saying . . . “Here Love, this is too much for me, my nerves can’t take it!”  She took the ticket, went inside to an excellent seat and watched perhaps the most exciting hour of play in the tournament’s history. 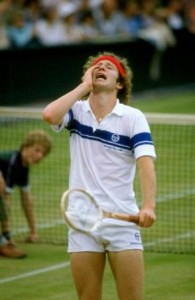 This match corresponded to the peak in the popularity of Wimbledon and no sporting event could compare with it.  Yet, something was changing for the worse. The behaviour of players on the court was becoming unruly and scandalous, particularly that of Connors and McEnroe. 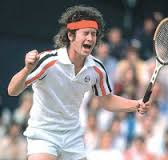 The two Americans were always complaining to the officials, questioning every judgement call, throwing their rackets in disgust, pouting and just making fools of themselves. (Recall, this was before the days of Hawkeye). I recall one match between the two of them which made me so uncomfortable I had to turn off the television and go for a walk! I was ashamed to identify myself as a compatriot with these ‘cry babies’.

Summer 1982: A Trip to the US  To continue this story, it is necessary to digress somewhat to a period in our family’s life which was quite stressful. In the  summer of 1982, having left teaching and founded a travel company for Americans living in Europe, I was obliged to travel to New York on a business matter. It was not a good time to leave my wife with our three sons as one of them was in the midst of a very bad patch and using marijuana to mask the anxieties of young adulthood.  I had just found a foil-wrapped container of the dope in his bedroom. I was about to put it in the rubbish when he reminded me of its somewhat expensive street value of such a product . . . a Thai Stick. For some reason, I didn’t dispose of it, but dropped it in a zippered leather pouch to get it out of my sight. Later, much to the irony of this tale, I would realise that the leather pouch was one that I use to carry my toiletries – like toothpaste and talc – when I travel.  (Perhaps the reader can see where this is heading).

Cut to the baggage claim area of the TWA Terminal at JFK Airport . . .  I am impatiently waiting for my suitcase and decide to speed things up a bit by sitting next to the opening where the bags first appear from the hold of the plane. Suddenly, I notice the presence of a rather aggressive young man who has placed himself just in front of me. I recognise him immediately as none other than the tennis wunderkind John McEnroe. He was tousled and looking like he had just been awakened from a deep sleep. However, he seemed from his body language to be amenable to a conversation.

I believe I spoke first, asking him about his travels since I knew Wimbledon had finished over a fortnight ago. Relaxed, as we were forced to wait for the bags, he said that he had just returned from Yorkshire where his doubles partner Peter Fleming had married an English girl. (McEnroe was Fleming’s Best Man at the wedding.)

He seemed slightly grumpy to me, though it was perhaps understandable. He lost the singles championship to Connors that summer – the only year between 1981 and 1984 he didn’t win –  and also lost the doubles title with Fleming to the Australian pair Peter McNamara and Paul McNamee, their frequent rivals.

McEnroe mentioned something about feeling comfortable in England just as the conveyor belt revved up.  Soon his enormous silver gym bag with DUNLOP written on the side came spilling down the incline.

My suitcase was jettisoned shortly thereafter and I followed McEnroe to the customs counter, fascinated with his swagger and nonchalant attitude. I positioned myself just behind him as we faced the US Custom Officials. I’m glad I did this because otherwise I might not have heard the exchange which ensued. The customs officer unzipped his bag and proceeded to very carefully search all the contents of the bag – excessively, I thought –  much to the displeasure of McEnroe. I waited for a remark, and sure enough, a sarcastic question followed . .

The customs official glared, but wasn’t too bothered. On the other hand, I became terrified as I remembered . . .  at that very moment . . .  what I was carrying in my own suitcase – the foil wrapping of marijuana in my leather toiletries bag!

Slowly and stealthily, I backed out of the line and returned to the baggage area feigning that I had forgotten something. I opened my suitcase and found the leather pouch. Convinced that the security cameras were focused on me, I was petrified but somehow managed to remove the Thai Stick and tuck it under the moulding of the conveyor.  I whistled a bit, then walked with my own nonchalance back to the same customs counter. I held my breath.                          The official didn’t even open my suitcase and I strolled into the terminal breathing almost normally. 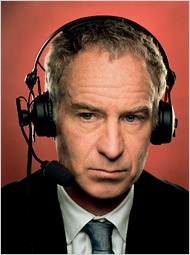 Though he has become the respectable face of Wimbledon as a successful commentator on the action in SW19, I still cannot say that I admire him. Yet, I do think of what might have been and often remember with gratitude The Day John McEnroe Saved My Ass.

I know this is boring, but I did promise a great cartoon about why Archimedes leaped out of his bath and shouted Eureka . . .

the drawings are by Kevin Kallaugher of The Economist.