Skip to content
One morning in the summer of  2006 I went for a hike with my son Mark and  my grandson Joel, toward Vinca – a town in the mountainous Lunigiana region of northern Italy where we have a home.  It was a bright sunny day as we started to walk up through the beautiful valley at the foothills of the Apennines.  As we started to gain elevation and began to enjoy the lovely atmosphere, we soon came across a large wooden barrier across the path which I took to be designed to stop cows going any further. Being the optimistic, hard-headed person I am, I decided to circumvent the barrier if at all possible.
However, just about that time, my grandson reported that he wasn’t feeling well and didn’t want to go any further. He asked his father to take him back and continue to Vinca in the car. Without any hesitation, I announced that  I would push on alone towards the town and would meet them there.  I had wanted to visit Vinca for some time because of its reputation as a charming village which produces great bread and at the same time, an historic place dating to WW II. In 1944, barbaric and aggressive Nazi-Fascist soldiers slaughtered 20 young people there in an attempt to break the spirit of the Italian people.
I carried on up the mountain towards Vinca and soon came across another barrier. Again I went round it, convinced that I would come back to the path taking me in the right direction. Sure enough, I soon found a trail which had been partly washed away and covered by scree, but clearly  a former path. I negotiated this pretty well and finally reached a ridge pretty high up. I could see a very steep descent down the other side of the mountain with some semblance of a path which I concluded must lead to Vinca.
Surprisingly, just then I came across a wire which looked to me like an aid for walkers. Somewhat encouraged, I used this to guide me down the steep stretch on the other side of the mountain. I picked up a piece of cardboard to help protect my hand sliding on the wire. At this time I was descending at a pretty rapid rate, not realising that the path back up to the ridge would now be pretty treacherous, in fact almost impossible. Just then I saw a road below and recognised my son driving my car along this road. In a rather childish way I called out, but he could never hear me because it was so far down into the valley.
Realising that I had no water, no sunglasses, no mobile phone and my clothing was grey and blending into the colour of the mountain, I began to question the wisdom of going any further. Also, I was getting very tired in the hot sun, so I took a rest to try to regain some energy. However, the sun continued to heat me up and I began to feel rather exhausted and depressed. The only protection I had from the blazing sun was my much beloved Philadelphia Eagles’ cap. 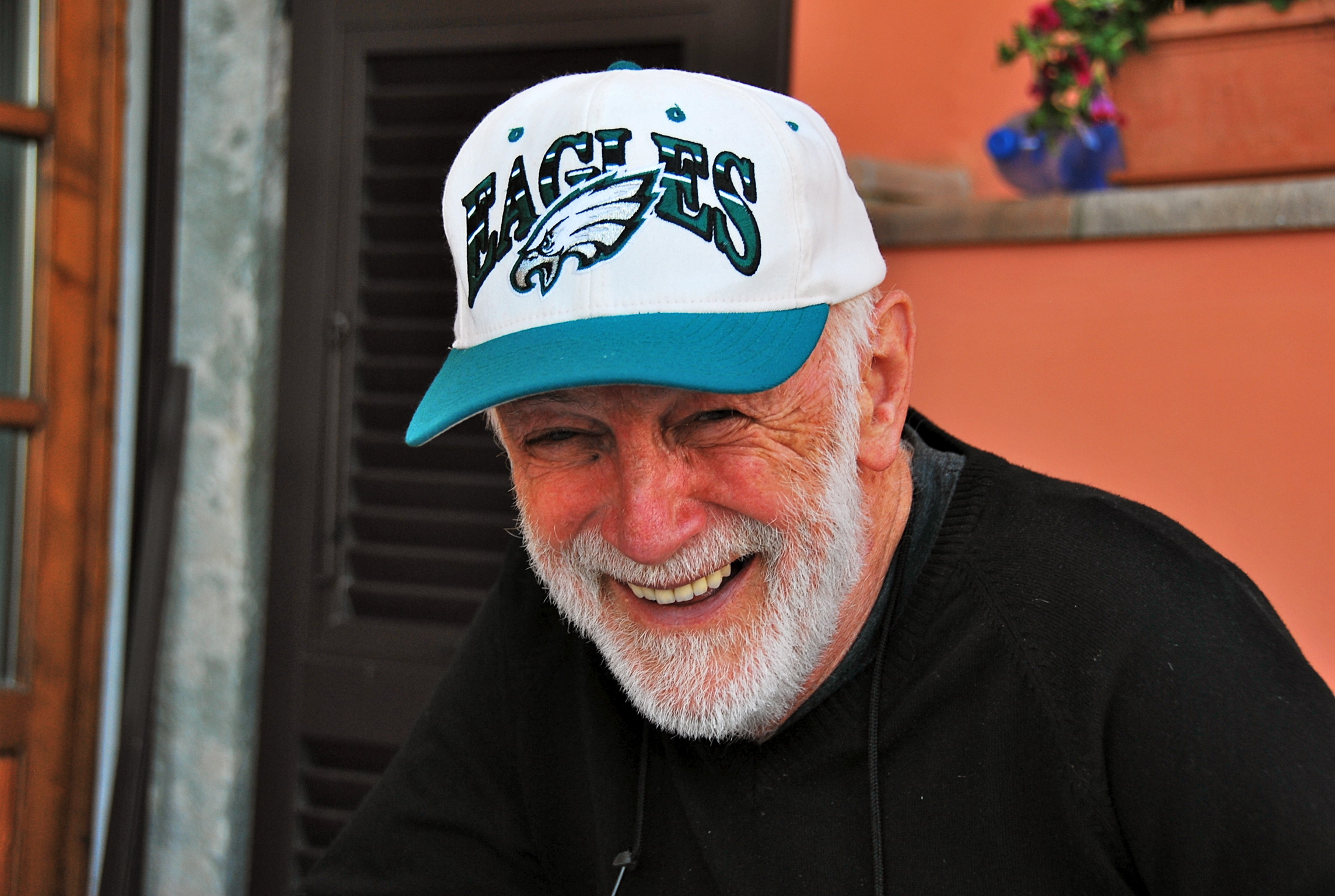 By now, it was late in the afternoon and I found a comfortable position on the side of the mountain and thought I’d take a short nap. I fell asleep almost immediately and in order to keep myself from sliding down the mountain, I wedged my legs around a small tree to keep me secure. I must have slept for some time and when I woke it was already afternoon.  I looked behind me and realised it would be a monumental task to go back up to the ridge where the wire began, so I continued to make my way further down the mountain convinced that the wire would lead me to Vinca.
But suddenly,  I received a massive shock when I found the wire abruptly disappeared into space and would thus no longer assist  me with my descent. I realised then it was probably a supply wire, rather than an aid for walkers. I also became aware that I was very thirsty and there wasn’t a single source of liquid available. So I made the radical decision to urinate into a container and drink my own urine. The only thing available was my bumbag (which the Italians call a ‘marsupial’). I managed to fill the pouch with my urine and swallow as much as I could. Strangely it did not seem so terribly bitter, I was happy to have some liquid in my body and thought it was probably a good decision.
I realised there was no way I could make it back to the ridge before nightfall and I began to look for a comfortable and safe, i.e. level, spot where I could spend the night and perhaps recoup my energy. I secured myself to a small bush using the belt on the bum bag and felt quite secure. Realising that I would be causing a great deal of stress to my wife and family by not returning, I nevertheless thought the best solution was to sleep under the stars.

I used to teach courses in astronomy and during that night I was reminded of the wonder of the sky – full of stars with no light pollution. I was thrilled by the vision of the clear sky which was as black as you can imagine. I could recognise certain constellations which I had seen before only in textbooks. I quickly fell asleep in the cool, clean air.

I had no fear of any animals on the mountain and surprisingly had a very good night’s sleep. I woke up just as dawn was breaking. It was chilly and I felt refreshed – beginning to think of retracing my steps. However, I soon realised the idea of climbing up these intimidating rocks to the ridge was nearly impossible. The slope of the mountain was too steep. On my descent using the wire I had covered quite a lot of ground at high speed without realising how treacherous it would be to return the same way. It was also impossible to continue downwards with no wire and such a steep incline.

Slowly, I started to go back up and navigated two enormous boulders. The task seemed overwhelming. That was when I first began to feel that I was doomed and realised that without help I would not be able to save myself. While the overhanging edge of the boulders gave me some relief from the sun, I realised they were less than helpful, as they hid me from anyone on the lookout.
After what seemed an eternity crawling on the mountain, I noticed a helicopter overhead and thought perhaps they were looking for me. Sure enough it was, circling around the whole area. However, as I was trapped under the overhangs of the enormous boulders I  gave no target because my clothes blended into the colour of the rock. I became rather fatalistic and really thought I was going to die right there on the side of the mountain. I soldiered on for another hour or so and two or three times saw the helicopter around the area, but not at a good angle to see me. I honestly thought I was finished. Then a miracle happened . . .
The helicopter came around again – but this time much lower – and one of the crew spotted me, pointing excitingly in my direction. I felt euphoric.
Finally, the helicopter got into a position directly overhead and a ladder was lowered with a member of the rescue team. I remember the extremely strong air current from the blades. As the ‘copter drew closer, the wind from the blades was so intense I lost my head covering.  I was appalled that I lost my treasured Eagles cap which flew off onto the mountain. However, I was relieved, realising I was not going to die on the mountain. This was my first realisation that my family would not have to go through the horrible pain of my death knowing I had put myself into such stupid and dangerous situation.
The rescuer put me in a harness and tied me securely to the ladder.  Then,  the cable was hoisted up and finally I fell inside the helicopter with my face and hands onto the floor with a sigh of relief. In just a few seconds we descended down off the mountain into the town of Monzone and I was taken to a cafe. I drank 5-6 cups of coffee and ate about four croissants in minutes. It was great to be alive and safe.
I had been rescued by a most fantastic team of locals who often make searches like this in the Lunigiana area which is considered very dangerous. However, the rescues don’t always end as happily as this one. Later, I asked how long they would have searched for me on the mountain and they said about 30 days. I reflected that I would not look like much by then.
In the following days, I became quite a celebrity in our area of Northern Italy and was recognized in our village and in restaurants as the ‘professor who almost perished on the side of a mountain’. An article appeared in the local paper with the sensational headline . . . 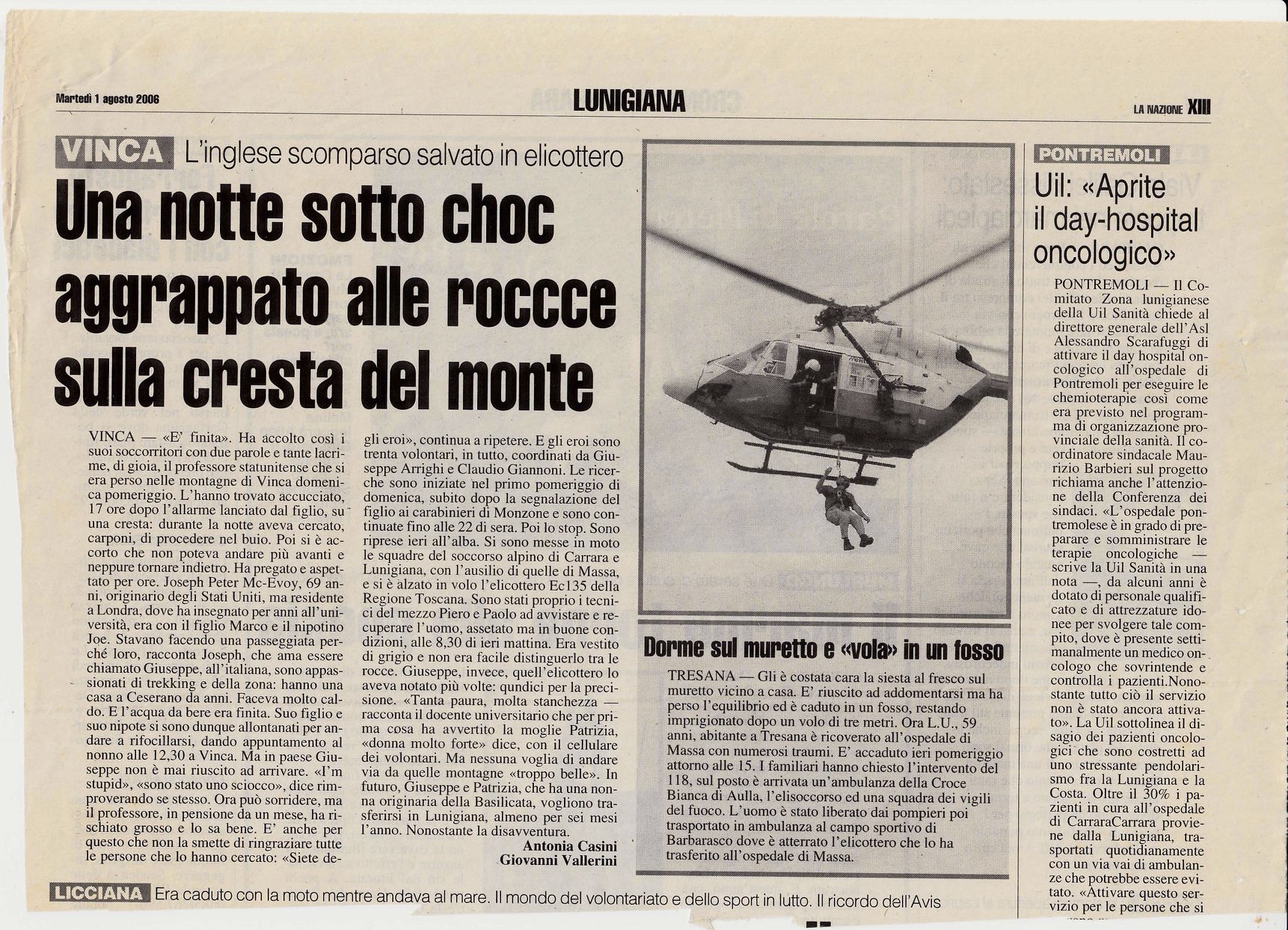 Una notte sotto choc aggrappato alle rocce sulla cresta del monte
(A night in shock, clinging to the rocks on the crest of a mountain)
After a rather long nap and some good food from my wife’s kitchen, I began to feel that life is worth living after all. In the days that followed, I had severe dreams – maybe better described as nightmares – and often awoke in the middle of the night sliding down the side of the mountain. Yet, I consider this an illuminating experience since I saw myself face death, if only briefly, without crying and without praying. At least that is something salutary.